Cal Anderson Park has been the backdrop of an evolving protest scene throughout 2020, first registering international infamy as the location of the Capitol Hill Organized Protest (CHOP) against police brutality, an experimental but short-lived autonomous "cop-free" zone. Most recently, the park was in the news again after a fatal domestic dispute between two of the campers there. Last week, Seattle Parks and Recreation hosted the second of a series of hotly-debated community discussions about the future of the park. Although the zone was forcibly shut down in July, the community gardens have continued to be a meeting space for marches, and the shelterhouse has been repeatedly occupied and turned into a mutual aid center. Fresh graffiti covers the walls in red, warning: “No Cops.” It turns out this isn’t the first time these words have been uttered about the park. In fact, this seemingly-innocuous municipal spot has a long tradition of being contested, and has served as a source of community intrigue for over a century, if not longer.

Much of the history may have been forgotten but, despite the passage of time, some of the concerns from the park's past share eerily similar themes with conversations we continue to have in 2020, echoes of past ghosts. The long tradition of challenging designs for this plot of land began at the turn of the century before Cal Anderson Park (then known as Lincoln Park) was even developed. Seattle High School at Broadway and E. Pine (later called Broadway High until it closed in 1946) was the growing city’s first high school building. With Seattle’s population doubling between 1890 and 1900, the student body was reflective of the city’s expanding demographics, which included “African-Americans, Asian-Americans, new immigrants from Europe, and the children of Seattle’s wealthiest citizens.” Meanwhile, one block from the school was an undeveloped old construction worksite south of the city’s new reservoir. In a promised bid to beautify the land for later public use, the city optimistically declared it “Lincoln Park” in 1901 and, when Seattle High opened in 1902, the boys of the relatively diverse school began using the empty lot to play baseball. People began to complain.

Whether it was the sight of certain boys or that they were a genuine nuisance, newspapers began carrying stories about the so-called disturbance. It was rumored that “some of the boys that congregate to see the games are responsible for injury to the city’s property” in the form of “throwing rocks, sticks, dirt, etc. in the reservoir.” The Board of Public Works instructed the Chief of Police to intervene and send an officer to “keep a watch out for the boys and if caught in their depredations to immediately arrest them.” That same year, The Seattle Daily Times declared the city had seen “More Arrests Since January 1 Than Ever Before in a Like Period.” 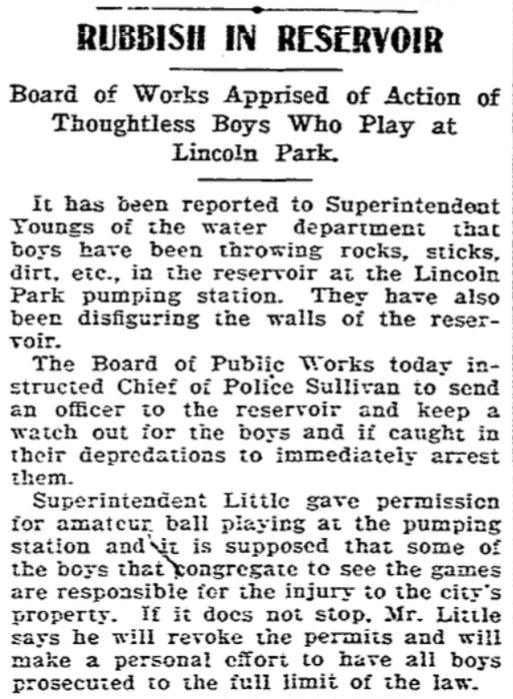 One antidote to the increasing crime and urbanization of Seattle was popularly believed to be providing more wholesome outdoor activities for local children. “Children must have recreation," argued a 1903 article from The Seattle Republican, defending the unruly kids. "Force them to find it in the public streets and the moral standing of the future citizen is lowered,” continued the popular newspaper (which also happened to be a newspaper published and edited by Horace R. Cayton--the son of a Mississippi slave and white plantation owner’s daughter--who had moved to Seattle after Emancipation, and whose family was one of three Black American families living in Capitol Hill a few blocks from the park before racial restrictive covenants were put in place). “Some provision for the physical and moral training of children is a duty of the community.”

The Superintendent of Parks agreed, announcing in 1904 that his plan was “to establish a playground south of the reservoir… less than a block distant from the high school [for] the use of the students.” Tucked in at the end of the article was a small detail: “...it will be recommended that a Park policeman be kept on duty to look after the conduct of all who use the grounds.”

Famous East Coast landscape architects, The Olmsted Brothers, were hired. That June, they wrote the President of Park Commissioners documenting “the very decided preferences of the citizens of the locality” and “that no provision is to be made in the [park] design for the more vigorous forms of play, and particularly the design must be such as to make baseball impracticable.” A later 1908 report confirms that the reason behind this directive was “men and boys who played their games without regard to the proprieties of decency in regard to the use of profanity, vulgarity and undesirable loafing.” As a result of these instructions, the Olmsteds delivered a straight-forward plan for a traditional landscaped park with no playfield. The Park Board took one look and rejected it. Extremely cognizant of optics, they wanted to avoid overt controversy and to at least appear to be appeasing the community. They clarified for the Olmsted’s that they absolutely wanted a baseball field… they just didn’t want it to be usable!

Revised plans included a playfield but, this time, a proposed shelterhouse in the middle of the park was strategically positioned just south of a walkway on E. Olive so as to serve as a kind of deterrent to rowdy baseball games, rendering the field “not large enough for regular games by the larger boys.” Even with the shelterhouse blocking full games, the landscape architects warned about the playfield’s usage, complaining, “it seems unjust that a few men or full grown boys should occupy such a large proportion of the park for their own amusement and to the practical exclusion of the far larger number of visitors.” The Olmsted’s reasoned that the open shelterhouse would attract more desirable park uses, writing that the structure “proved a very popular feature in small city parks, as women and children like to congregate in such places.” Perhaps most compelling, the Olmsted’s recommended an unusual feature, possibly prompted by the city’s recent desire: “It would be our idea to have an enclosed basement affording accommodation for toilet rooms for men and women and a room for a policeman in charge of the grounds.”

The same year the park plans were being discussed in 1904, local newspapers were peppered with calls to increase the Seattle police force. “The lack of sufficient police protection is without question the reason for many of the crimes that have been reported,” one newspaper cried out, claiming less than 100 officers could not cope with the city’s 150,000 citizens. In the fall, the Chief of Police requested 25 more men for his force and quickly received them. Despite the increase, less than a year later, the mayor recommended that “the police force should be further increased, and sub-stations be constructed at Lincoln Park, Fremont, and Interbay.” By October 1905, the mayor had grown bolder, adding, “I do not feel that it should be necessary to furnish any comparative data regarding the necessity for the enlargement of the police force of this city.”

The public, however, had a different impression of Seattle’s police and these opinions provide clues about the reaction to the park plans. An article from around the same period in 1904 admonished police officers “who have forgotten the respect to all persons, whether white or black, yellow or brown.” The following year in 1905, there were general concerns about police abusing their powers, including reports that “men have been placed in jail without charges and totally forgotten” and that intoxicated policemen were bullying downtown bartenders for bottles of free whiskey.

By October, residents of Capitol Hill had grown wary and they were not happy at all with the idea of a police sub-station in their future park. The Seattle Star reported “residents are preparing to sign a petition protesting against the establishment of a police sub-station at Lincoln park.” With Seattle’s first high school building just one block away and a generally low public opinion of police conduct, the petition stated that a police presence would “desecrate public ground” and “have a bad effect on the high school students.” The mayor attempted to save face and back-track, stating that he “did not recommend Lincoln Park specifically” and that the proposed park sub-station would be “merely used as a detention station.”

There is no documentation of what happened to the local petition objecting to the park sub-station, but it must have been successful because no police station was ever built there, and the shelterhouse has never had a basement. The redesigned park grounds were unveiled in 1909 (and would later be re-named Cal Anderson Park in 2007).

In the nearly ten years since the park had first been declared a public ground to when the new landscaping and shelterhouse were opened, the number of Black Americans in Seattle had increased from 400 to 2,300, and many of those who attended high school went to the school on Broadway and presumably also used the park playfield. Enrollment continued to grow at such exponential rates every year that the district was forced to set up six portables on the Lincoln Park field to take care of the overflow until the 1920s when Garfield High School opened and racial restrictive covenants were first established on Capitol Hill.

Incidentally, although no police station was built in Lincoln Park, the mayor and Chief of Police were not stymied. New mounted officers were eventually added to the force to begin patrolling Seattle’s residential neighborhoods. An actual police station, however, was not in the cards until 1986 when the Seattle Police Department got their East Precinct, a renovated building on 12th Ave. & E. Pine, one block from today’s Cal Anderson Park, the original location proposed more than 80 years earlier. Even then, the mayor at the time acknowledged, “There still are people who feel the presence of the police is not a positive for the neighborhood.” He quickly added, “but an overwhelming number feel it is a positive.”

As for the kids who wanted to play baseball... it would not be until 1963--nearly two decades after the high school on Broadway was permanently closed--that the park shelterhouse was torn down and a new brick one was built, this time on the north side of the E. Olive walkway finally allowing for the playfield to be enlarged to truly permit a full game of baseball.

Today, activists drawn to the Cal Anderson Park shelterhouse are occupying a new building that was erected in 2003 after funding was secured in 1999 by a group of neighbors who “wanted their neighborhood to be safer, more attractive, and more accessible.”

As Parks and Recreation sorts out community opinion about potential permanent installations at the park to commemorate the CHOP, they join a long tradition of those who have tried to juggle competing public perspectives about the park’s design and usage. For more than a hundred years, this specific location has been igniting community opinion about seemingly disparate yet inextricably intertwined societal issues, a tangled hex as old as Capitol Hill itself. 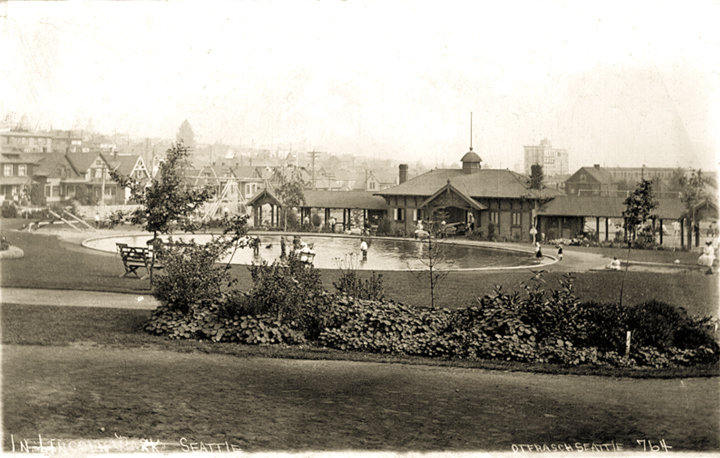 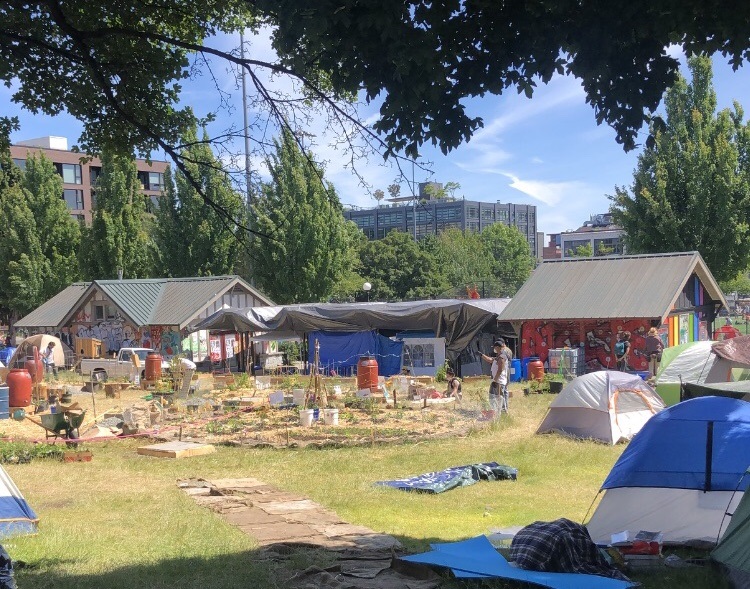 Disclaimer: Any views expressed or inferred in this story do not necessarily represent the positions of Capitol Hill Historical Society.

SOURCES FOR THIS STORY:

A Little Color Goes A Long Way: The Tile Work On Broadway

A Little Color Goes A Long Way: The Tile Work On Broadway

Historical Society Doings for the First Half of 2020